Hudson may refer to: 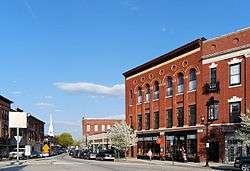 Hudson is a town in Middlesex County, Massachusetts, United States.

Before its incorporation as a town in 1866, Hudson was a neighborhood and unincorporated village within the town of Marlborough, Massachusetts, and was known as Feltonville, and before that, known as Eastborough. From around 1850 until the last shoe factory burned down in 1968, Hudson was known as a "shoe town." At one point, the town had 17 shoe factories, many of them powered by the Assabet River, which runs through town. Because of the many factories in Hudson, immigrants were attracted to the town. Today, most people are of either Portuguese or Irish descent, with a smaller percentage of people being of French, Italian, English, or Scots-Irish descent. Hudson is served by the Hudson Public Schools district.

In 1650, the area that would become Hudson was part of the Indian Plantation for the Praying Indians. The Praying Indians were evicted from their plantation during King Philip's War, and most did not return even after the war ended.

Hudson (first name and dates unknown) was an English professional cricketer who made 1 known appearance in first-class cricket. He played for Sussex (aka Brighton) against Middlesex at the Prince of Wales Ground, Brighton in 1792, scoring 0 in his only innings.